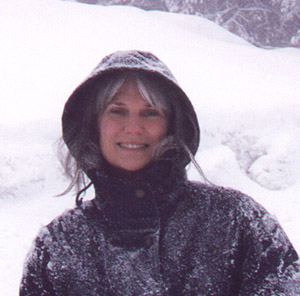 Leslye Layne Russell, poet, singer-songwriter, and dancer, is a native Northern Californian and first-wave baby boomer, born in Chico and raised in Redding. When she was very young she lived for several years in Portola, a small trainstop town on the Feather River near the Sierra Valley in the northern Sierra Nevada Mountains.

Layne received her degree in English from California State University, Chico, where she studied poetry and creative writing with George Keithley, author of the book-length epic poem “The Donner Party” and other poetry collections. She did post-graduate work in Religious Studies at CSU, Chico, and in the arts and Religious Studies at Naropa University in Boulder, Colorado. While at Naropa Layne was on the first editorial staff of “Loka,” Naropa Institute’s journal, and enjoyed the privilege of working with the late Rick Fields who was editor of “Loka” at that time.

Of particular significance in the development of Layne’s artistic expression was the period of four years of arts study while living in Vancouver, British Columbia, where she studied and performed with local and touring minimalist dancers and multimedia artists. Her extensive modern dance, movement, and improvisation study, teaching, and performing greatly influenced her music and writing.

Dance associations and influences included Phyllis Lamhut of the Alwin Nikolais Dance Theater, dancer and choreographer Bill Groves of the Nikolais Dance Theater and other dance companies, the late Iris Garland of the Simon Fraser University Dance Department, Vancouver Laboratory Theater (of which Layne was a member, performer, and teacher), Barbara Dilley of Grand Union and later Naropa University, Yvonne Rainer of Grand Union, the late Vancouver dancer Heather McCallum, Vancouver choreographer and dancer David Dressler, Multitudes (of which Layne was a member and performer), Canadian choreographer and dancer Grindl Kuchirka, and Anna Wyman of the Anna Wyman Dance Studio.

Layne’s meditative, metaphysical background and orientation comes through subtly and naturally in her writing; her poems reveal the inherent beauty and consciousness in everyday life. Also, being a dancer and musician, Layne writes with a heightened, rich sense of sound and rhythm. Layne is an award winning poet published in “The Dickens,” “Poetic Express,” “Poetry Now,” “In Sublette’s Barn,” “Free Cuisenart,” “Poetry Repair Shop,” “Fish Dance,” Vancouver Canada “Tibet: Art Speaks,” “One Dog Press,” “Minotaur Press,” “Baker Street Irregular,” “The Hold,” “In the Grove,” “Disquieting Muses,” “TADS,” “Blue Moon Quarterly,” “Haiku Yearbook,” “Haijinx,” “Poets4Peace,” “Poets Against War,” and others. Layne’s poetry books, Last Visit, a collection of poems inspired by her mother who died in 1994, and A Quiet Place, a poetry collection, are published by White Owl Publishing. Into the Dark Mountain, a collection of mountain poetry and haiku, will be ready in 2013.

White Owl Web is in the process of re-designing the entire site. Big job! This is going to take a while, folks, and it will have to be done in stages. Thank goodness for CSS and Dreamweaver! Looks like a lot of nights of midnight oil here. White Owl Web hopes you will enjoy the new design, organization, and updates. This site has been gently nudging the Owl for a very long time to give it some serious attention. The time has come!

What are the Best Possible Hands in Blackjack of Gambling Online